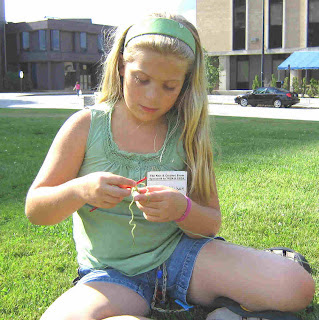 McKenzie is a remarkable 10-year old crocheter whose mother and grandmother are such close friends of mine that "close friend" feels odd to say and "family" feels better. Not only do McKenzie and I have a serious interest in crochet in common but I just found out that Ananda is a long-time crocheter just like her mom, Lucy!! This was their first crochet conference, which was a short road trip for them. Since the conference will likely be in Manchester next year, I'm betting that Lucy will be coming with Ananda and McKenzie if she doesn't want to miss out on any more hugs than she already has. 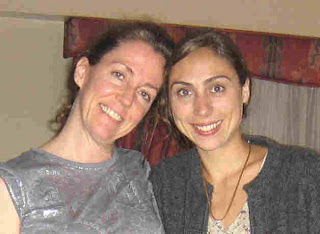 (That's Ananda on the right and a very sleep-deprived me on the left.)

There's a pack of 10-year-old crocheting girls who roam the conferences now (McKenzie makes 3). I don't have permission from all of the moms to post a photo of the three so you just have to imagine it!

One thing that McKenzie wanted to learn was how to make a popcorn. People: she learns so fast, she could have been a professional crocheter who invented stitches in a past life. After working a small swatch of popcorns, we turned it into a wrist cuff, and she never took it off, even to sleep. We put 2 "buttons" (Clones Knots) on it. She learned that stitch so well that she did the 2nd one, and swooped that hook through all the loops in one fast pass. The first time.

She witnessed the frantic completion of the Chaps I wore in the fashion show (I need to blog about that!) and wanted to know what some of the less common stitches were that I was doing, so get this: she learned how to do a foundation sc, foundation dc, a split sc, and a linked dc! Ananda too!

That's not all. Then McKenzie and I did a special class together the next day with the amazing Kathie Earle of Ireland, our international teacher for 2007. Here's a pic of McKenzie and me in the market after class and she's wearing a gift from Kathie pinned to her shirt. 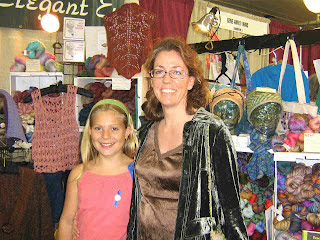 I had taken one of Kathie's classes a long time ago and knew she'd be wonderful for McKenzie (patient, flexible, creatively freeing, among many other stellar qualities). This was McKenzie's first time crocheting with thread and a tiny steel hook and she set about it with her signature competent focus and left that class a threadie with TWO completed Irish roses. By the way, this means she also reads and follows patterns--I'm a witness.
Okay so is there anything about crochet that McKenzie finds daunting? In the market a vendor showed her a book and she said, "No thanks, it's too easy for me." She chose Sasha Kagan's lovely new Crochet Inspiration and found the next thing she wanted to learn: a ripple stitch pattern so that she could make a headband. I looked at the page and thought, "Wouldn't it be so much better if she could use the symbol diagram for it? She does great with written instructions though. I don't want to overload her, but I don't want to underestimate her." So I explained what the symbols were there for and I told her why I prefer them, and it was up to her. She opted to try the symbols and I'd say it took her 5-7 real minutes of concentrating on them and trying them out to say, "I like them better too." And that was it.

I can't imagine bullions would be daunting because clones knots weren't. I bet she's freeforming right now. A freeform book was her first purchase (I think it was Jenny Dowde's but was possibly Prudence's?) and was already acquainted with everyone in the freeformers' booth by the time I found her and her Mom!

I learned to crochet around 8 or 9 and was completely immersed in it at 10. I can't fathom what it would have been like to attend a crochet conference at that age!!
Posted by Vashti Braha