I've Been Tagged! With a Meeeeme

It's like a blogrite of blogpassage (it's my first time) and isn't "meme" a cool word? So let's see, the tagger says I should post the rules, which are:
"Each person tagged gives seven random facts about themselves. Those tagged need to write in their blogs seven facts, as well as the rules of the game. You need to tag seven others and list their names on your blog. You have to leave those you plan on tagging a note in their comments so they know that they have been tagged and need to read your blog."

OK: Seven Random Facts About Me:

1. In 5th grade I learned how to sing the names of all 50 states, in strict alphabetical order, and I can still do it. It's permanently etched in my brain. If I ever must recite something to stay alive or avoid a coma, this would be it.

2. I just learned that one of my ancestors, an aunt, was hanged as a witch in Salem. That's pretty random, right?

3. I can spell 99% of the words in the English language correctly. I wish I had grown up in a time and place where I could have competed in Spelling Bees. Since this is a list of facts, and 99% is kind of a ballpark figure, it might be more like 98%. (This isn't an invitation for spelling or grammar police to add harassing comments on my blog! I don't approve of any language policing. Conversely, I have immense respect for people who COULD correct people and DON'T unless asked. If any spelling-challenged folks are reading this, don't worry, I don't police people's spelling.)

5. My first car was a white Firebird. When I drove it fast enough I felt like I was on a 'fine Arab charger' as Mick Jagger would say. I don't really enjoy driving a car unless it feels like a horse.

6. I've been some variation of vegetarian for a total of about half of my life (such as macrobiotic, vegan, raw foodist, ovo-lacto, etc) and currently am not. Even when I'm doing the meat thing, I still eat lotsa veggies and nearly zero red meats.

7. I lived on the Bahamian island of Eleuthera for the 4 hottest months of the year. Then I moved to Maine in time for winter. (I didn't plan it that way.)

And now I get to tag 7 people! How about Bud, Noreen, Angela, Chie, Annette, Robyn, X (I'm waiting to hear if her blog is private).
Posted by Vashti Braha 6 comments: 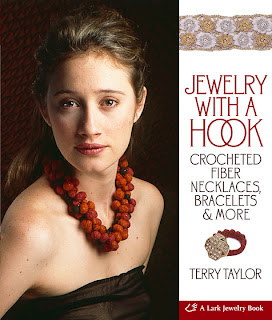 Pictured: the cover of Lark's forthcoming crochet jewelry book, due out Oct. 1'07!
U-betcha I'll be blogging about my included designs because I have supplemental data and it's hard. to hold it. back. Nevertheless I shall remain an example of proper professional comportment.

Swatching up crocheted jewelry designs set me on a path to a secret paradise, my Shangri-La. I feel a list coming on: 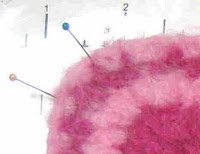 Flushed with felting pleasure and success*, here's a Ten Things I Love About Felting Crochet List:
Do you feel it too? Feel the felt love?
----
*success in the professional sense--more details on the felted design when published!
Posted by Vashti Braha No comments:

Today is Marty Miller Day on the Designingvashti planet! Check out her blog here:
http://notyourgrannyscrochet-marty.blogspot.com/ The focus is swatching and I'm hoping newer crocheters will be inspired by Marty's blog to find out what an art swatching is. For me it was a consciousness shift. I guess it happened sometime when I started designing. For my younger crochetself a swatch didn't used to be an end in itself--swatching was not a process that I enjoyed for its own sake. Instead, it was a means to an end that I had to get through to make something "more" or "real" such as a sweater (a.k.a. the "gauge swatch").

Besides finding one's gauge, a swatch is a content-rich research document. I save them like I save notes to myself. Like poetry fragments. Or like maps to secret gardens. 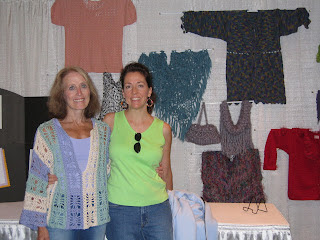 Here's a pic of Marty and me in the old-style CGOA booth (before it got a facelift by our competent Offinger staff), circa 2005, Oakland Chain Link conference.

We had just finished breakfast and were about to leave for a field trip to the legendary Lacis, hence the sunglasses I have handy.
Posted by Vashti Braha 1 comment:

Found Some Great Crochet on the 'Net

"Twin artists crochet enormous 'reef'": Margaret and Christine Wertheim. Margaret says, "Coral reefs are, as it were, the canaries down the mine for the global warming system."

Kathleen in Hawaii crocheted an amazing array of leis--some based on real flowers associated with specific Hawaiian islands, some imagined (inspired by the yarn). Her blog shows not only her leis but how they were incorporated into a larger May Day library display! 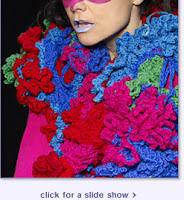 Some of us crochet designers sure would like to see exactly what Bjork is wearing! We know it's crocheted. It brought to mind the crocheted coral reef for at least one person, and for me I thought of some multicolored ruffled tulle stoles I saw in Vogue about 2 years ago. I looked all over the internet this morning and couldn't find an image though. :-(
Posted by Vashti Braha 2 comments: 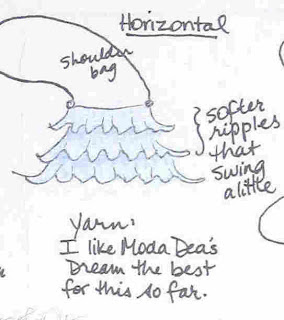 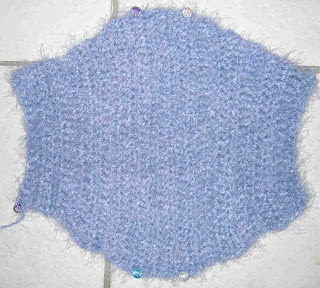 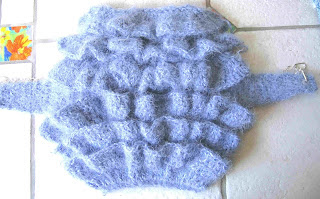 Here's a published design for which I had the rare foresight to take pics as I went. It's on p. 58 of 100 Purses to Knit and Crochet, ed. by Jean Leinhauser & Rita Weiss (Sterling, 2006). This bag is a stiff-sided trapezoidal box shape smothered with ruffles. I think the finished bag is hard to capture in photos because to me it comes out looking like a big ruffly lump, whereas if you saw it in person, you see how the ruffles 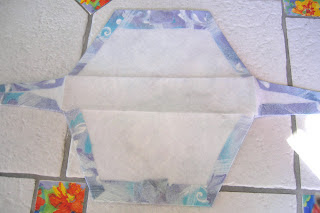 move against the stiffened structure. I mean, this bag has corners. I'm thinking now that if I'd tried getting a photo of the inside of the bag, the structure would be really obvious. (I'm still learning how to make a picture speak a thousand words.)
It has a magnetic closure and a silver jewelry-like chain handle that's long enough for over the shoulder, or it can be doubled up to carry as a handbag.