Marty and I attended the Orlando Needlework Show just before Thanksgiving and I think of it now as the "Conference of Pleasant Surprises".
It marks the first wearing of my silvery-sage 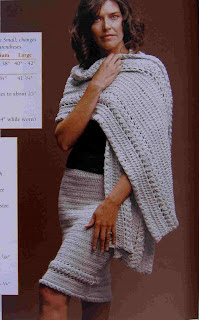 wrap design, which is published in Jean and Rita's 100 Crochet Projects as part of a set (it has a matching pencil skirt). I'm happy to report that it was a wonderful companion--it kept me warm, the textured row created flattering diagonal lines of drama, the stretchy yarn caused it to cling to my shoulders, and best of all, my wrap and I basked in compliments. Marty is a witness.
I almost didn't bring the wrap because I 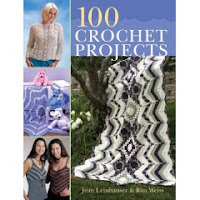 didn't know if I'd want to be tugging to keep it on my shoulders all day, but instead I'm now into wraps and shawls. I like how wide this one is because I could wrap it around me 4 different ways. I remember intending it to be 70" wide, but the yarn is so stretchy that it becomes 84" wide, which originally worried me. Now, after wearing it all day, I'm glad.
The CGOA booth in the market was hoppin'! 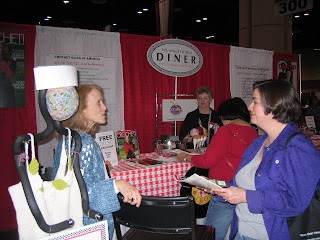 Debby somehow kept up with all the questions and new member app's coming at her right and left! Plus, current CGOA members were treated to a complimentary light-up hook just for visiting the booth. Marty was the perfect person to field questions on teaching children how to crochet.
We wore crochet everywhere and saw little of it. This is, after all, traditionally a scrapbooker's conference, so we weren't surprised; but it was remarkable how many people were there for crochet specifically. It also seemed like these crocheters were not newbies. In fact I talked to a yarn shop owner in north-central Florida who said she has so many advanced crocheters coming into her shop that she doesn't know what to do (she's a knitter herself). I was in a daze when I heard that. I'm noticing something similar at the new yarn shop where I'm teaching--advanced crocheters are coming out of the woodwork.
Who knew Florida is a hooker's hotbed? (sorry, couldn't help that)
Posted by Vashti Braha 1 comment:

CGOA Gets a Meme! 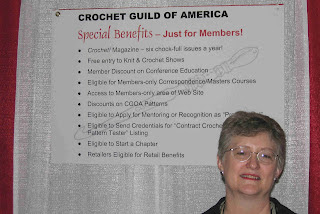 Let's do the first-ever meme for CGOA, inspired by a recent topic that came up in the CGOA-membership yahoo group: "Are you crocheting something that you would not be crocheting if you were not a CGOA Member?" Here are the rules for participating in the CGOA Meme:

1. Begin by including a link to this post and a link to the person who tagged you.
2. Answer the above question (Are you crocheting something that you would not be crocheting if you were not a CGOA Member?), or more broadly this question: "How has your experience of crochet been changed by your CGOA membership?" Give a single one-line answer, or more for extra credit.
3. End by linking to 3 (or 5, for extra credit) other bloggers among whom you'd like to see squirm publicly with this challenging, yet strangely satisfying essay question.
My answer is, since joining CGOA in 2001:
-- I have a gazillion more crocheting friends and by now some of them have become close friends (you know who you are).
-- Without CGOA I most certainly wouldn't have 3 years of crochet designing under my belt by now. Designing would hav remained a fuzzy childhood fantasy indefinitely but CGOA made it a reality so fast and effortlessly that my head was spinning.
-- CGOA exposed me to crochet as art. The yahoo group Crochet Partners introduced me to skill-refining info and to CGOA, but it's CGOA that introduced me to the really big picture: artcrochet.

Now I'll tag 5 blogging guildmems: Marty, Laurie, Kim, Amy, Dee. Narrowing it down to these 5 took me 15 minutes!! But I figure I can predict who y'all will tag so that most everyone's covered.
Posted by Vashti Braha 2 comments:

Email ThisBlogThis!Share to TwitterShare to FacebookShare to Pinterest
Labels: CGOA

I'm very proud to be able to announce our First Annual Design Contest. 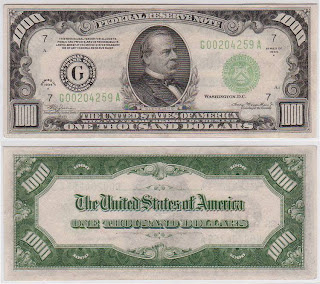 It's the real thing--$1000 Grand Prize! Plus First, Second, and Third prizes in 4 different categories. Plus a People's Choice Award. All of the entries will be displayed and winners announced at our national conference held July 23-27 2008 in Manchester, NH. The deadline for entries is June 15, 2008.

The board members of CGOA have been laying the groundwork for it for the past year so I've been waiting a long time to be able to announce it! Being our FIRST ANNUAL design contest, that's code for we're learning a lot as we go with this first one and we have high hopes that it will become a regular thing. So the categories might expand or change next year, or the rules tweaked, you know. We've already been getting helpful feedback. One important rule is that you must be a CGOA member and if you're not, it's easy enough to join.

The designer in me perks up at $1000, how about the designer in you?! (That's a 1934 Grover Cleveland bill pictured above.)
Posted by Vashti Braha No comments:

Took the Chaps Out Trick or Treating

The kiddies in their Halloween costumes inspired me. Started with the chaps and built a costume from there. At first I was going western, hence the hat, 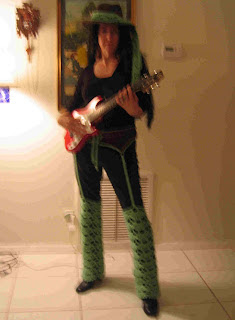 but the lurid crochet made me think of the iconic crochet-friendly Janice Joplin. (Terrible photo quality, I know) Kept wishing I had a crocheted hippie-fringe vest to match.
Picked up a guitar for a prop and absentmindedly kept humming "I Got You Babe", bringing ANOTHER crochet-friendly icon to mind--CHER!--and then I KNEW who I had to be, I even have a wig of long black hair. I've seen every Sonny & Cher Show episode at least once. I followed Chastity's gestation and birth and early appearances on the show, so I went as pregnant Cher.
She crochets, you know.
One of my neighbors said I belonged on the streets of London.
Posted by Vashti Braha 2 comments: