In the midst of hosting house guests and attending the TNNA conference, a new crocheted hat happened, known as "Vanilla Crown." Early in this blog's life I talked about "Hat Yoga": a hat designing journey for my dear friend Kalli. 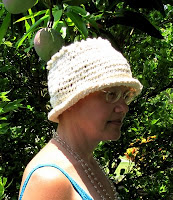 The Vanilla Crown is the latest addition to the Hat Yoga collection and the first to feature two tunisian stitches for specific reasons.
We're having a heat wave here, and my house guest is not used to the extremes of air conditioning and humid subtropical heat. After all the chemo she's had, she doesn't need the extra stress on her immune system. So I wanted to create a summer hat that breathes but protects, and is of course exquisitely soft. I chose Decadent Fibers' organic color-grown cotton in "vanilla".
I've watched some of my hats stretch out over years of use. Sometimes it's due to the yarn, sometimes the stitch or gauge. For this hat I focused most on which stitch and gauge. The yarn is bumpy and fleecy and for it to be summery, I wanted a stitch that wouldn't amp up the bump, thickness, or weight; and one that wouldn't add stretch. My thoughts turned to tunisian crochet.
I wanted to frame my friend's face with a gently flaring brim that wouldn't droop over time. I thought of how tunisian simple stitch (TSS), worked firmly, naturally curls. It's also solid enough to block the sun.
As for what I was in the mood for: I was not up for doing tunisian in the round, nor entrelac. I needed something mindless enough so that I could socialize while crocheting. We also like to watch movies together. I was willing to commit to crocheting a rectangle, then seaming it to create a hat band with just the right fit before adding the brim and crown. 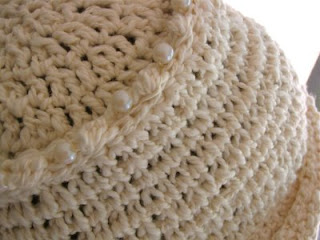 So here's what I think of the result based on the design goals:
Those are the pros, want the cons? Well:
Posted by Vashti Braha 1 comment:

2018 Update: I've incorporated this blog post into a newer one.

I wonder how many crocheters are aware of small refinements they can make at row edges to improve an angular shape, such as a triangle? 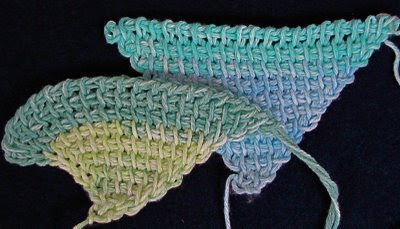 I wasn't aware of it myself until I designed the trapezoidal "Swingy Ruffles" bag for a Jean Leinhauser and Rita Weiss book in 2006. My first swatches resulted in rounded blobby shapes. No matter how dramatically I increased and decreased stitches in each row to create diagonal lines, the row edges restricted the shape.

As you can see in the photo above, the left and right edges of the yellow-green swatch are too tight, causing the top edge to bow outward. (These are Tunisian crochet swatches; see mini photo tutorial below.
The simple, obvious solution for regular (non-tunisian) crochet is to add a turning chain or two to loosen up the row edges, and it works.

Diagonal lines that are created by steadily increasing or decreasing stitches in every row need room to flex and breathe.

This is especially important for fashion crochet! Some elegant garments depend on the drape of truly angular edges for their dramatic flair.

Maybe you knew this already. If so, let me know if you've found advice like this in crochet books or sites because I like to alert crocheters to sources of great information.

Tunisian Crochet Edges
What about corner-start tunisian crochet? I'm currently designing a triangular wrap in which you begin at the bottom corner of the wrap and steadily increase at each edge to create a big triangle. In Tunisian (a.k.a. "afghan crochet") there is more than one way to add stitches at the beginning and end of a row.

The common squeeze-in-a-stitch method works okay except in cases where you are increasing a lot. That's the case with the swatches in the first photo: I increased at each end of every row.

Adding stitches repeatedly has a momentum to it, a vector. A small momentum can be absorbed by the stretch of the fabric, but a greater momentum needs room to fully expand. Shell stitches have this momentum too.

A way to look at it geometrically is that when we crochet a square with the same number of stitches in each row, the rows stack up in columns. Stitches fill their little slots. When we (more rarely) start in a corner and increase in each row for a while to make a triangle, and perhaps then turn it into a diamond by decreasing every row until it comes to a point, each added stitch at the edge is actually launching off on a diagonal angle.

How to Do It
Here's a way to steadily increase stitches in Tunisian simple stitch that helps the increase stitches do their shaping job (like the bluish swatch in the 1st photo). You'll see a wee photo tutorial when we get to the left edge. I've been experimenting with it this week, using different gauges and fibers. I like that:
To increase 1 stitch at the beginning of a forward pass, chain 1, insert hook in first vertical bar and pull up a loop to create the added stitch; then continue across the row, pulling up a loop in each vertical bar across. So far, so what, right? No surprise maybe? Some crocheters already increase by working into the very first vertical bar instead of skipping it.

I recommend that you chain 1 first. It gives a more flexible edge, especially if you will be adding more increases to this edge in each row. It seems to control the tension of the first stitch. To my eye, the chain melts into the diagonal edge and adds a little substance.
To increase 1 stitch at the end of a forward pass, I borrowed a stitch from macrame called a Half-Hitch Knot; in knitting it's known as the Simple Cast-on (or Backwards Loop Cast-on). In my testing, two half-hitches added to the hook at the end of the row work great as one increase.

If you add only 1 half-hitch, it's a flimsier loopy edge. I'm unable to find a video that would show you how to do a half-hitch while happily crocheting along, so until I create one I hope my 3 photos help. It's cool. I enjoy crocheting half-hitches. I like what they look like.

How to make a Half-Hitch: Your goal is to add a loop onto your hook that has a twist in it so that it stays on your hook. All I do is instead of doing a usual yarn over with the strand of yarn from the finger controlling the tension of the yarn, I yarn over with the strand behind my tension finger. I "scoop" it from the palm of my hand. I know, sounds weird, and a little video would clear it up instantly!

In photo 1 of 3, I added two loose half-hitches to the hook at the end of the forward pass. In photo 2 of 3 I simply tightened them. Aren't they cute?

Tip: It might help you later to put a stitch marker in that pair of half hitch loops.

In photo 3 of 3 you can see what the two half-hitches look like now that I've pulled the yarn through them to begin the return pass.

What About the NEXT Row?
Crochet another forward pass of Tunisian simple stitch; start it with an increase like the row before. When you get to the end of this new forward pass, insert your hook in both end loops of the half-hitch pair. Then increase by making another pair of half-hitches.
When half-hitches are used to augment a widening left edge, you can see how they'll blend into the edge in a slightly bumpy, pretty way, and match the look of the chain 1 edge on the right edge.
Below I've added a quick edging.
I hope that you'll try this and let me know what you think. If you've learned about this elsewhere, please tell me about it.
Posted by Vashti Braha 10 comments: