Or, How I Celebrated the Crochet Guild of America's Fifteenth Birthday! 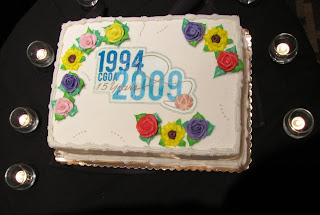 CGOA's 15th annual national Chain Link conference, held Aug. 5-9 in Buffalo, NY was simply amazing. I have so much to blog about it that I haven't known where to begin. In the meantime I uploaded photos and tweeted about it. My tweets always show in the right hand column of this blog. 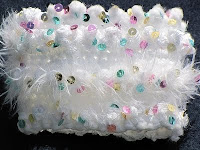 I love the anniversary theme: Crystal Jubilee! It inspired me to crochet a special bling coffee cozy in case Buffalo had great espresso.
In fact maybe I loved the theme a little too much :) Each time I pack for a conference I get a little crazy. I suddenly invent projects that make me pack too much yarn. This year I threw together materials for crocheting a variety of Crystal Jubilee Tiaras, in case I found the time during the conference, LOL. (I never did.)

At the last minute on my way to the airport, I made this Crystal Jubilee Bracelet (turns out it's a 20-minute project). Later at the conference 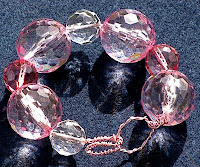 I crocheted a bangle version with glittery Jelly Yarn in honor of Mary Beth's birthday (see end of Tracie's blog post about the Chocolate Bar birthday; also see Dee's pics). I'm crocheting the birthday bangle in this photo taken at the Friday evening annual members' meeting. You can kind of make out the big pink crystals. It makes Little Loopy's eyes twinkle.
Speaking of twinkling eyes, how could I not wear new eye bling for the occasion? My rainbow glitter eyeliner was so sparkly that along with the bracelet, folks at my dinner table nominated me for the Bling Contest!

See Dee Stanziano's post for the best play-by-play of the contest. Basically, at the Fashion Show dinner each dinner table seated about 8 people. The people at each table nominated the person at their table who displayed the most bling. These nominees went on stage together and then voting by applause began. Congratulations to First Prize Winner Joan Davis!
All this Crystal Jubilee talk might be ringing a bell if you saw my last-minute pre-conference blog post about the silk vest. I'm happy to report that a) I completed it! I was weaving in the last ends at the dinner table; and, b) so many people asked for the pattern that I'll have some good photos when the pattern's ready. You might get an overall sense of it from this conference photo. Also, c) turns out it that embroidering crystal beads all over it would have been overbling, so it's a good thing I had the bracelet and eyeliner to ramp it up a notch, tastefully ;)
Posted by Vashti Braha 2 comments:

Just Back from the Craft SuperShow in Orlando!

Good thing I brought my camera! Here are some pics from the Craft SuperShow, a Craft and Hobby Association (CHA) event that was open to the public. All photos were taken on July 31. 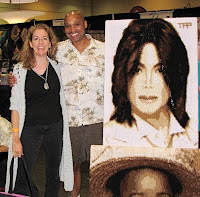 The highlight of the day for me was when I discovered that Todd Paschall was there with some of his amazing crocheted portraits! I've been following Todd's posts in online crochet forums for years. It was fabulous to finally meet him in person. 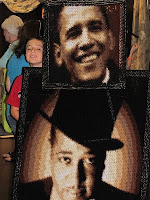 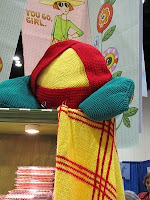 The whole show was
mobbed actually! We had Disneyworld-like lines of people waiting to pick up their pre-registered tickets!! The show organizers were great at keeping the line moving quickly. I loved seeing so many people interested in crafting.
Another highlight of the day was finding out that one of my new designs is coming out soon. A photo of it being modeled was projected on a big screen. Why oh why didn't I take a photo of it?
You can see more photos from the big event in my Flickr album. You'll see some new crochet and knit fashions for children. I remember also seeing great new patterns for wraps and shawls and afghans and throws but didn't get photos of those.
Isn't it funny how you can be holding a camera in your hand and not think to use it? Except for when you do?
Posted by Vashti Braha No comments: