I can finally SPILL the DEETS on the RIVULINE! They concern two main things: a progressively trippy stitch pattern, and the nearly ONE HUNDRED photos I took of it. (The first photo at left is from the book. You should see how different it looks in some of my pre-publication photos below. Also a few of my GAZILLION swatch variations.) 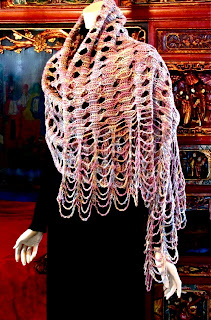 I received a copy this week of Dora Ohrenstein's latest book, The New Tunisian Crochet: Contemporary Designs from Time-Honored Traditions. The Rivuline Shawl is a new crochet pattern that I designed for the book.

To me now -- 2 years later! -- the Rivuline Shawl is a tactile record of my mind slowly being blown. That's why I have to show you my own secret pics.

It turns out that Rivuline came packed with eurekas for my pre-Tunisian-freeforming brain. That swaggy border is 100% Tunisian crochet too. Until Rivuline, I didn't know Tunisian crochet could do that!

It started with a stitch pattern idea that grabbed a hold of me back when Dora visited me in December, 2010. Dora's visit turned out to be a big ol' Tunisian crochet PARTY.

She brought wondrous goodies: a Japanese collection of Tunisian crochet stitch patterns with the best collection of stitch symbols and diagrams I've ever seen; and a big stack of Duplet magazine back issues (half of which have cool Tunisian stuff in them).


Witness the "Tunisian and Regular Crochet Visit a Hall of Mirrors!" newsletter issue that welled up a few months later.

That newsletter topic is really about Rivuline, but I couldn't say so. Instead I show Petals, its offset beaded cowl version. A few months later, Rivuline caused one of my all-time favorite designs to happen: the Tunisian Filet Aero.

Part of the reason I took so many photos is that I had trouble objectively evaluating them.
Looking back, I now know why: the stitch experiment was a groundbreaking experience for me of Tunisian crochet. (At the same time, I was finding out how different fibers in pink tones are affected by any little change in light source and angle.)

Notice how the textures of the stitch pattern looks so different in the photos. So does the yarn color. (I remember this driving me crazy! And the emails to Dora: "Does _ or _ come across in this photo? How about this one?")

For many more photos, also see the Petals photo album.

I eventually got a hold of a copy of the Japanese book Dora showed me. That inspired issue #10, "Tunisian Crochet: Breaking Out of Ruts" of my Crochet Inspirations Newsletter.

By the way, Rivuline may look like traditional rectangular stole construction, design-wise. In reality, the border is a gradual variation of its stitch pattern. This way, a crocheter who's new to this way doing Tunisian crochet has a chance to get used to it before the variations of it begin.

Another invisible design feature is that the foundation chain is disguised as a Tunisian Purl Stitch row. This was another discovery for me, which I then used for the seam of the Petals loop scarf/cowl, with beads for fun.