Triple Crochet vs. the Granule Stitch

I've been having fun experimenting with a new kind of crochet stitch! 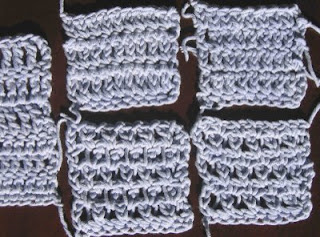 It has a unique braided look and is easy to make. A few days ago Teresa posted a Youtube link to a video tutorial on "Triple Crochet" in the Crochet Partners forum. This is no ordinary Triple Crochet.
In the first photo, the 4 swatches on the right are my experiments. On the far left is a swatch of some rows of standard dc and tr for comparison. Click on each pic to enlarge.

Part of the fun of having stitch dictionaries and patterns designed by different crocheters is learning new stitches. Some stitches have more than one name, some have no name, and others are so standardized that they always go by the same name and are always made the same way. 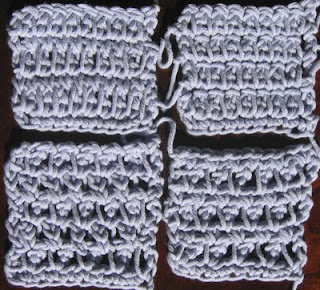 The 2nd photo shows the back sides of the same 4 swatches in the first pic above. Note the long single strand along each stitch.
I think it's safe to say that most crocheters for most of crochet history begin what Americans call a triple or treble, and what Brits and Aussies call a double treble, by yarning over the hook twice before placing the hook into the stitch to be worked, and then working the loops off of the hook in twos. Check out the how-to video at Nexstitch for this stitch. Any "learn to crochet" section in books or magazines shows the same standard way and standard name: Triple/Treble (US, often abbrev. "tr") or Double Treble (UK "dtr"). (The UK Treble is equivalent to the US Double.)
The "Triple Crochet" taught in the Youtube video has nothing in common with the standard tr. For example, you begin the stitch with no yarn-overs as if to make a Single Crochet (US sc/UK dc), and one loop is worked off twice, which creates 2 chain stitches, before working off the last two loops at once. Instead, this stitch is similar to the "single crochet picot stitch" that forms the basis of what is called "Granule Stitch" in Donna Kooler's Encyclopedia of Crochet (p. 139) and in the Harmony Guides vol 6, p. 36. It also appears under the name "Bead Stitch" in the 365 Crochet Stitches a Year Perpetual Calendar for May 22. In all of these cases, however, you make 3 chains, not 2, before working off the final two loops together. (By the way, the same Granule Stitch appears on p. 75 of the reprint of the Harmony Guides ed. by Erika Knight called Basic Crochet Stitches, but the swatch is so wrong!)
The biggest difference is what gives the Granule Stitch its picot or beadlike look. You chain 1 to begin the row and work a sc in the stitch before and after the "sc picot stitch" and this causes the 3-chain sc sts to scrunch over and make cute bulges.
In this 3rd photo you can see my attempt at a Tunisian 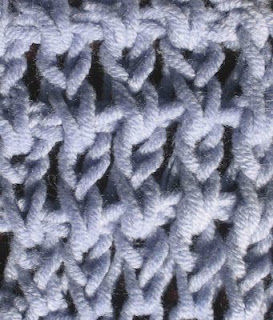 version--this is the front view. I like it!
The new "Triple Crochet" stitch in the Youtube video stands straight and tall, no bulging. Something that doesn't show up in the video is the strand of yarn running vertically along the length of each stitch. (It reminds me of the lone strand alongside bullion sts.) I've provided photos of both front and back views of my swatches so that you can see what I mean; the strands tend to recede to the back of the stitches.
To keep this strand from limiting the height of this chained stitch you must make the first chain loosely. Watch how loose the tension is in the video while the stitches are made, especially at the foot of each stitch. When you pull the finished stitches up to their full height, that lone strand tugs the "feet" of the stitch tighter. 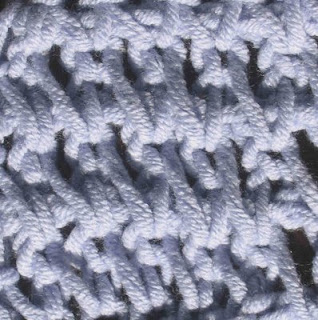 Photo #4: back view of my Tunisian version of the stitch in which you can see the long strand of each stitch.
I wish to thank Elissa (hope I spelled that right), the person in the video who opened my crochet world to a new kind of stitch!
I'd like to suggest that we call it something else. The "Extended Single Crochet" (esc) is the same except that it has only 1 chain added to the sc before completing it. So by adding 2 chains the way Elissa does it, it would make sense to call this stitch a tall esc, perhaps abbreviated "tesc". The stitch looks braided to me, so for a more poetic name I think of my Tunisian variation as "Tunisian Braid Stitch".
Posted by Vashti Braha 2 comments: