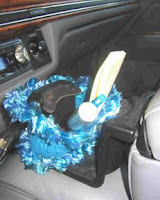 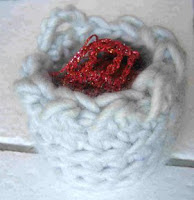 I have this compulsion to crochet coffee cozies. I've made dozens and no two are alike. So far 2 designs are published, one in Crochet Today! and one by Berroco (scroll down to see pics in righthand column). It's a fun way to turn a swatch into something or to use a small amount of highfalutin' yarn that I'll see and touch a lot. I never have to use a cardboard coffee sleeve again--they're ugly, boring, and wasteful, and so is the doubled-up paper cup. The colors and textures of a crocheted cozy, on the other hand, fire up some brain neurons while the fresh-roasted coffee fires others.
I have too many now, so the ones I haven't given away have little jobs to do. My first attempt at felting a cozy works well as a bungee thingee in my car. The cup holder in my car was SO LAME until I stuck a coffee cozy on it. Now things are bungeed to it.
A coffee cozy that I made in a basket shape (has a bottom) out of stiff hemp is a perfect place for my sunglasses. I have also put crochet hooks in it in a pinch.
Exhibit C demonstrates the way a coffee cozy is the perfect size for keeping a ball of crochet thread from unwinding. (Even though this cozy has an open bottom, the thread doesn't fall out.) I first discovered this use when I had a cozy in my purse and wanted to throw a ball of crochet thread in there but didn't want it rolling around.
Some other uses for coffee cozies are:
- Tunnel for pet hamster
- Experimental sleeve cuff swatch
- Wrist cuff, watch band --see Robyn's "Beer Bracelet"
Posted by Vashti Braha 3 comments: Here's the actual cover of the book. The ski mask cover shown in the previous entry was the working mock up for the past 6 months or so. I think it's still showing at Amazon, but you need to be thinking Pink Wig now. No more ski mask. It's pink wigs from now on.
So who designed the leg and hand warmers?
Good times.
Posted by Vashti Braha No comments:

Email ThisBlogThis!Share to TwitterShare to FacebookShare to Pinterest
Labels: Designs 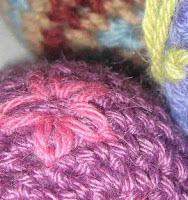 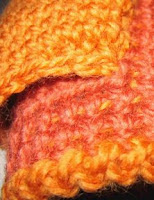 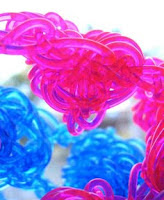 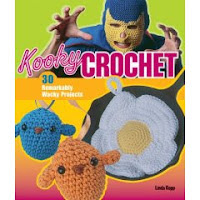 The rest of the copies (mine for example) are on the cargo ship. I'm having trouble waiting! Consider some of the designers: Marty Miller! Tammy Hildebrand! Gwen Blakley Kinsler! Myra Wood! Pam Shore! Jennifer Hansen! Drew Emborsky! Regina Gonzalez! Sharleen Morco! Sharon Mann! (Someday I hope to meet the rest.)

Kooky designs are a BLAST to do. Wouldn't a "Kooky Volume II" be swell?
Posted by Vashti Braha 2 comments:

[W]hen clothing is made from some of the very unusual and interesting pattern stitches herein, the pattern stitch itself becomes the style, and it should not be obscured or belabored by complicated styling known as high fashion, which usually enjoys so short a period of popularity that it is often out of style before it is finished. Most certainly an item lovingly made by hand over a period of weeks or months, and with it a joyous anticipation of the item finished, should be of such simple lines that it will stay in style until it has worn out.
Barbara Aytes, 1972

It is with regret that I return this book to the public library. I hold pretty much the opposite position toward fashion crochet than Ms. Aytes does in the above quote but it won't stop me from adding a copy of this book to my collection when I get a chance. The content is solid, accomplished, and well-rounded. The author certainly met her stated goal: to "strike a happy medium between those books which are full of pattern stitches and nothing to make, and those which are full of items to make and few or no pattern stitches".
Maybe now would be a good time for me to state a personal bias: I'm not interested in making or wearing timeless fashions. I don't shop for them and designing them is not a meaningful career for me. Designers who appreciate timeless fashion are the ones who do it the best and so I'm happy to leave them to it and remain impressed from afar.

The opposite is what I buy, wear, crochet, and design: trendy. I think the world can never have enough trendy crochet patterns and I'd produce far more designs than I do if I humanly could. I even teach a class on designing trendy crochet at the CGOA conferences. Contrary to what timeless crocheters say, I think crochet is well-suited for trendy projects because:
- crochet itself continues to be a trendy look in the larger fashion world (yay)
- the internet offers a whole new opportunity for trendy crochet patterns to reach the widest number of crocheters a.s.a.p.
- you can crochet it with plenty of time to wear it, and make more for your friends and relatives too! The amount of time it would take me to sew a garment is roughly comparable to how long it would take me to crochet it. This is the exact opposite of what Ms. Aytes says--that by the time you put in all that work crocheting something fashionable, it's out of style. This is the amazing versatility of crochet: both Trendy and Timeless crocheters can be right!

Back to the timeless book: Ms. Aytes' designs have the kind of simple lines of good proportion that I admire in timeless designs. This is one reason I want to own the book. She offers a range of slippers, for example, that are great to have on hand as templates if nothing else. Remarkably, I can imagine wearing many of these designs even though:
- they are photographed flat in black and white;
- they are intended to look timeless, and did I mention timeless is not my thing?;
- we're talking 1972. (I think of myself as 1970's-friendly, yet so far as I review these books I often cringe.) Compared to many early '70's crochet books, the photos are high-quality, the projects are well-finished and blocked, and the overall selection of projects is sound.

Viewed within the context of my project of reviewing pioneering 1970's crochet books, the author's goal is not exciting enough to justify having the term "adventures" in its title. I was a little disappointed in this respect, but the book makes up for not delivering a promised adventure in other ways. Besides offering a thoughtful collection of timeless designs, the stitch patterns are thrilling! Each crocheter is probably unique when it comes to what counts as thrilling stitch-wise. For me, it's how uncommon it is, how difficult it is for me to figure out how it's done by looking at it, and if the solid-vs-open shapes the stitches make are distinctive. Out of about 65 stitch patterns provided, only about 5 appear in every crochet book ad nauseum (plus another 5 or so motifs); the rest are unusual somehow. A few are downright alien to me {{said with shiver of delight}}.

When I began this '70's book review project, I envisioned zipping through what I had on hand in Jan-Feb'07 while taking a vacation from design deadlines. As people emailed me titles of books to add to my reading list, and as I immersed myself in reading them, I stopped expecting to skim and gab, and instead, ponder and savor and try to give each book its due. Now it's mid-April and I have design deadlines and then prep for conferences to do. So the bad news is that these '70's book reviews are going to slow to a crawl; but the good news is that I'm in it for the long haul--I'm NOT stopping. It's way too rewarding. Heck, I haven't even gotten past 1973 yet!
Posted by Vashti Braha 6 comments: 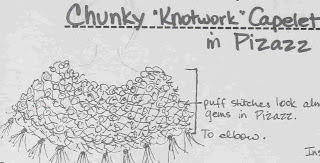 This design appeared in the November 2006 issue of Crochet! magazine (scroll down to see official photo in righthand column of this blog). The yarn is "Pizazz" by Caron and I loved working with it because the stitches plump up and have a rich look and feel. So naturally I swatched up some puff stitches as you can see in the swatch. In those vivid colors the stitches look like gems to me. 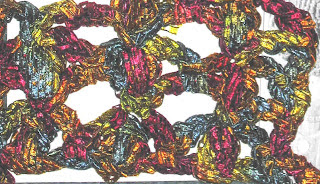 In the more muted rose shades the puff stitches looked more like rosebuds--I wish I had a close-up pic of those. I found a stitch pattern in a Japanese stitch dictionary that I modified so that the puffs are puffier and so that it could be worked in the round. 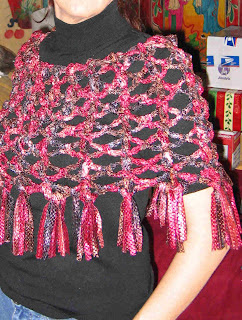 Email ThisBlogThis!Share to TwitterShare to FacebookShare to Pinterest
Labels: Designs 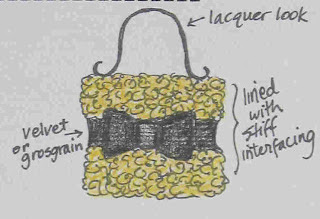 This design appears in the 2006 book, 100 Purses to Knit and Crochet by Jean Leinhauser and Rita Weiss, p. 102. Above is the sketch and below is what the finished crocheted piece looks like before lining, seaming, and adding velvet and the handles. 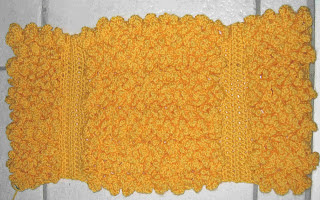 The finished purse is pictured with my other published designs in the right-hand column of this blog (scroll down).
The yarn is Lion Brand's Microspun, appropriately named 'Buttercup'! The non-buttercup rows, which are plain half-double crochet, are where the black velvet ribbon will be placed after the whole piece is folded in half and seamed up the sides.
In white or cream, buttercups become stephanotis and orange blossoms, in periwinkle blue they become forget-me-nots, in lavender they become lilacs (which I really miss since leaving Wisconsin), and in hot pink or ruby red they become four-o'clocks and geraniums. Linen yarn space-dyed in mauves might become hydrangea (which I also miss).
Posted by Vashti Braha 2 comments: