In my review of Iris Rathbone's 1969 book, I mentioned a stitch pattern that caught my eye. 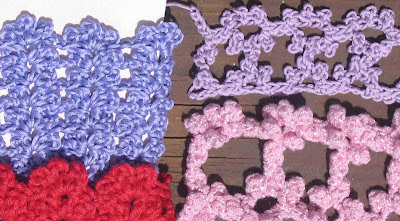 The purple and red swatches on the left only are the Rathbone stitch pattern in two very different yarns. I can't show more of the swatches because then we get into confidential designing information.... It's basically clusters of chain-3 loops so that they look like a cross between picots and a shell or v-stitch. Works up fast, faster than the picot-laden stitch pattern on the right (also shown in two very different yarns. You can can see the instructions for this one here.)

My left brain says these 2 stitch patterns have nothing in common but my right brain says, "I'll always love the look of the picot one even though it's kind of slow-going. When I want the same picot effect but fast, Rathbone's could do the job." (By the way the lefthand swatches look flatter than they really are. The free ch-3 lps form lacy nubbies.)
In the same review I also mentioned that I might find a photo of my attempt at safely removing previous rows from crocheted fabric. Does this old photo make sense? The stitch pattern is double-treble (dtr) filet. First I threaded a contrasting cord through the feet of the 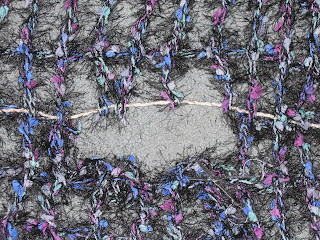 dtr that would become the new bottom row. Wherever the dtr were connected to the dtr below it, I wove the cord. That way, when I cut through the middle of the dtr row below and removed the remnants, the cord gave the dtr's of the next row something to hold onto.
So in the photo you can see that 4 dtr have been freed from the row below it (click on it for a closeup). It was so scary at the time that I took this picture. I suspect it's as terrifying for a crocheter as steeks are for knitters!
Then you just make a new foundation chain for the feet: In the case of this filet pattern, slip stitch into the feet of the first dtr, (chain 1, sl st in the feet of the next dtr) across. It looks 100% like it has always been the foundation chain.
Sorry it's novelty yarn but the open filet pattern helps make the photo informative. If have time someday I'll do this to a swatch of smooth yarn for a better pic.
Posted by Vashti Braha