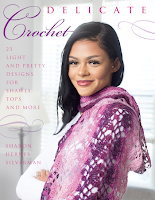 I'm popping in from my other crochet blog with a crochet yarn & pattern update.

The new Delicate Crochet book is out! It has 23 new crochet patterns designed by ten different designers in a lovely range of projects. Our Lotus yarn is featured in the book along with two new Tunisian crochet designs: Yveline Wrap and Ziggy Vest!


Using This Book in December

I have December versions of Yveline and Ziggy in mind, see below. December is the perfect time for a crocheter's first browse through this book. Some projects could actually be finished in time to give as gifts, and some are perfect for relaxing amidst the busy holidays. I also see projects in this book that I'd enjoy trying just after Christmas.

Every year, from January and into February, I crave delving into a clever new crochet skill. (I know I'm not alone in this because of emails I've gotten over the years from crocheters. In fact maybe there's the seed of a newsletter topic here...) 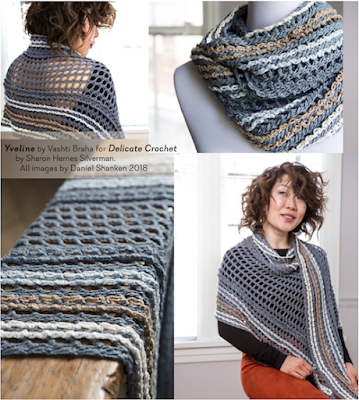 The Yveline Wrap is crocheted in simple offset rows, then surface-crocheted with love knot frills. It may be the first time I've seen love knots (lover's knot, Solomon's knots) with Tunisian crochet in the same project!

What could be breezier than little love knot bubbles? (Faster to crochet, too.) Unexpectedly, they also give a lean, urban chain-link look to a frill embellishment.

I tried single crochet stitches to make petite ruffles for Yveline's earliest swatches but they kept coming out too heavy for the light Tunisian net background. For example, see light green photo here.

During December I'm going to try a smaller cowl version of Yveline in fine wintery yarns. Right now I'm eyeing a buttery merino wool-silk blend for the background, and lace weight mohair for the surface-love.

This way the mohair is not actually against my skin but still traps warmth! Also, love knots in mohair have always made me swoon. When it's underway I'll add a link to it here.

Another December idea for Yveline is to do just the full-size background for a quicker sleek wrap—oh my gosh try a soft color-shifting yarn! Every row is the same so it's a good TV (mindless) crochet project. It's a versatile shape with lots of drape no matter what yarn you use.

You can always add the frills later (in January?). 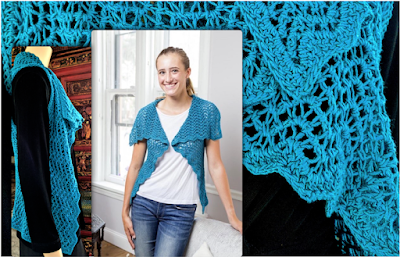 The Ziggy Vest is a simple rectangle of an airy Tunisian ripple stitch that I love. Create the armholes after the rectangle is done. (This kind of vest, which can be draped and worn several ways, is often called a "slitted stole" or "waterfall vest".)

I'd love to see this stitch pattern as a warm scarf. This is what I'm musing: if I do the rows lengthwise and change colors for stripes, I can fringe the scarf ends: zero ends to weave in.

I love the pearly sheen the Lotus yarn gives Ziggy's stitch pattern so that's making it hard for me to picture it in warm wools. I guess this means I need to sit with my yarn stash and start swatching.

Since Ziggy's stitch pattern is self healing, I can decide later (after December) whether to turn it into a keyhole scarf. Or even a pullover shrug! (Fold in half lengthwise, seam at each end for sleeves, and cut a head opening slit in the center. Without the head opening it would be a standard shrug which is cool too.)
Posted by Vashti Braha